This year marks 70 years in business for the manufacturer of Croatian kids’ footwear label Froddo. Now, looking to the future of the brand and its production, Rebecca Jackson catches up with its UK & Ireland representative, Pauly Tong.

This year signifies a crucial milestone for the manufacturers of Croatian footwear brand Froddo, though the label itself is just 17: quite something, when you consider what it has achieved in its relatively short lifespan. For the factory that makes the shoes, Ivancica, this year marks the 70th anniversary since the start of its presence in the shoe-making industry. And they’ve come a long way since 1946. Initially making shoes for miners, the footwear manufacturers eventually branched into ladies’ footwear and then began making children’s shoes.

The birth of Froddo in 1999 was, at the time, a move into the unknown. Entering the premium end of the kids’ footwear market – something which was less heard of at the time – it was not known what the reaction would be. However, it was a move that proved itself to be worth the risk, as today the brand is Ivancica’s flagship product.

Froddo is now present in key markets such as Germany, Canada, Russia, Austria, Italy and the UK & Ireland, to name just a few. Pauly Tong, director of Froddo distributors Kidsnewshoes.com, was responsible for bringing it to the British and Irish markets.

“I decided to work with the brand after I visited the factory while I was on holiday,” says Tong. “I have a background in manufacturing, but in the electronics industry, so I already had a knowledge of the process. I was working with a different brand at the time and wasn’t too impressed with the quality. I wasn’t intending to find the brand while I was on holiday, but I visited the factory and was impressed by the controlled production process. That really drew me in.”

Described as a premium product with a market price point, 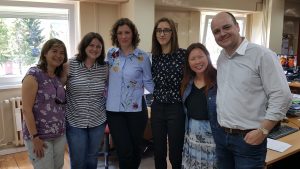 Froddo’s full range is designed in Italy and produced in Croatia at a footwear factory located in a small town called Ivanec.

Situated at the base of Ivancica mountain, the production facility is at home within a rural setting, one that Ivancica are keen to protect through clean production methods. It is partly a desire to preserve the landscape here and partly a genuine interest to supply its customers with a healthy, well-fitting product that explains why the production is so well-considered.

With an ethical stance on production, manufacturing is geared around the environment. Recycled materials are used whenever possible and water-based glues and dyes are all part of the well-managed production process. Reducing the number of chemicals not only minimises the amount of pollution to the surrounding town and environment but is healthier for the child who ends up wearing the shoe. Chrome-free leathers and vegetable materials are the main components of the collection.

Though Ivancica was established as a small group of shoemakers, today the team has grown to over 1,000 employees and the factory is a leading footwear manufacturer in Croatia.

“After the company made a name for itself as a maker of quality shoes, 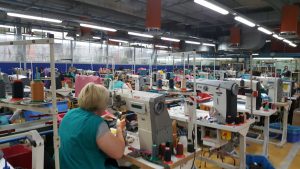 which were durable enough to withstand use in the mining industry, they thought about where else they could take the production,” says Tong. “Quality shoes were manufactured for women, then the production of a kids’ range seemed like a natural progression.

“The quality production methods and hardy materials were transferred into the kids’ shoes and are seen across the line in features like the reinforced toe cap to make the shoes more resilient. At the time there was a gap in the market for good quality, hard-wearing shoes made specifically for kids – and so the brand was born.”

All shoes typically boast features including padding on the inside of the shoe, ankle support, arch support, leather toe cap, leather heel support and a leather lining. Design features include a double lace option, reflective materials for use during cycling and the added option to personalise the back of the shoe with a space for kids to write their own messages. Sizes start from the prewalker model 16 and go up to an adult size 42. Typically, the bestselling age range is 1-8 years, and it is this age range for which the brand is best known.

“Though styles, ages and ranges vary, we keep certain features constant – though these are obviously changed as the shoe size increases,” says Tong. “Generally the main body of the collection will feature staple features like the support elements. The brand is recommended in the UK by podiatrists, and we work with them to develop these elements. We gain information on the latest updates and information on children’s feet as part of our shoe development.

“We wanted to present the market with a well-fitting shoe for children, rather than just another shoe that perhaps the producers didn’t care about. We wanted to do something different.” 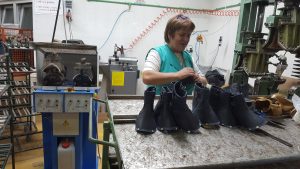 Operating as a shareholder company has its benefits, the combined invested interest in the good of the company being just one. This has no doubt affected the brand’s rapid growth and customer reach, which spans worldwide.

Not only has Froddo experienced roughly a 30 per cent growth rate for the past two years (the year before’s growth is estimated to be around 50 per cent), but the label has over 100 accounts in the UK, with business split fairly equally between the north and south regions. Not bad, considering the brand only launched at Moda exhibitions in the UK eight years ago. As the second country to join the brand’s list of export markets (Russia was the first), the UK is an important territory.

“Export is very important to the company,” says Tong. “They like to look forward and to be ahead of their competitors. Germany is the biggest market, though recently we successfully entered Australia with the brand and we’re also hoping to explore the markets in Asia next.”

Froddo’s immediate plan is to expand the brand outside of the UK and further outside of Europe. Positioned within London, Tong can work to attract international buyers from all walks of life in countries as far-reaching as Mongolia and Japan. Citing London’s global appeal as one of the reasons for this, Tong is able to act as a connection between the UK and international markets. However, despite the UK’s advantages, Germany remains the brand’s largest and bestselling market.

Starting at £11 for a leather lined structured indoor house shoe, wholesale prices go up to approximately £45 for a tall boot in the adult range. Bestselling styles for the brand have always included essential elements such as the rubber front toe protection feature and the ‘worn look’ effect with a rebellious scratched finish to reveal a vintage appearance. The Soft Sole range, which includes a dual insole feature, remains popular, too. The removable antibacterial insoles are anatomically shaped, breathable and mould to a child’s foot.

The s/s 17 collection introduces a bright and at times glitzy direction for the brand. Inspired by the Cote d’Azur, an intense Mediterranean colour palette of rich, contemporary hues includes shades of red, green, pink and yellow. A touch of glamour comes in the form of gold and silver glitter and soft patent leather. This season, the brand has created a new range of older girls’ T bar casual shoes in sizes 25–40, available in eight colours including black for the Back to School range.

Froddo developed its school range three years ago. Stitch down styles prove to be a popular choice, along with Mary Jane styles for girls and Velcro for boys. School shoes carry many of the same features as the brand’s everyday range such as leather toe cap, removable insoles and natural production methods and materials.

Other recent brand developments include Froddo’s B2B online service for its retailers. The service allows retailers to view and purchase fashion and school shoe stock all year around, with delivery in three to five working days. Retailers can also now add their websites to Froddo B2B, which in turn helps drive customers and increases sales.

As for the vision for brand’s future? It’s to keep on keeping on; although for the company that’s never meant resting on its laurels. After all, some brands might never produce environmentally friendly, healthy and well-designed children’s shoes.

“The plan is to further develop the environmental aspect of production, while working on making the products good value for money,” says Tong. Easier than it sounds. But if anyone can do it, Froddo can.

KidsNewShoes visit to the Froddo Factory May 2017 »